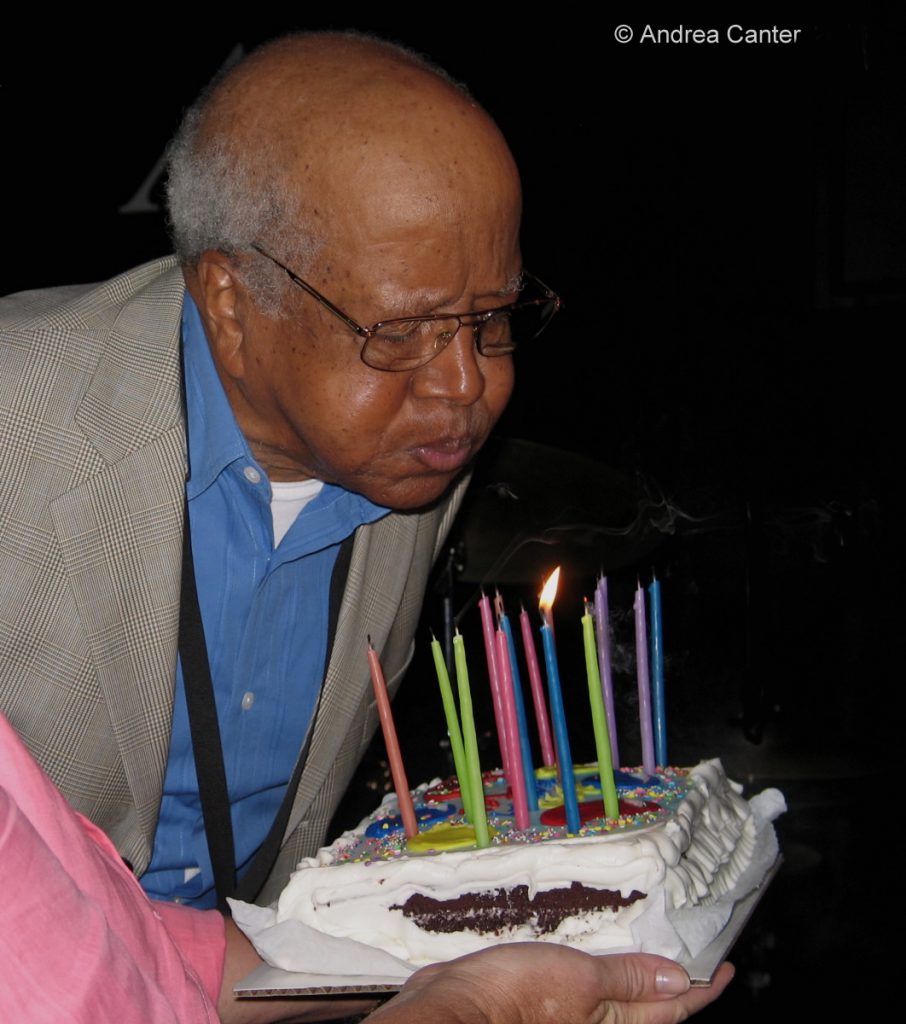 Irv blew out the candles –a decade ago! © Andrea Canter 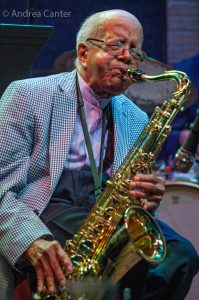 A number of years ago, tenor saxophone legend Irv Williams hinted at retirement in his liner notes for That’s All (2004), but clearly that was premature. Three CDs later, the then 88-year-old known fondly as “Mr. Smooth” issued a more dramatic hint with the release of Finality (Ding Dong Music) in 2008.  But apparently the title only referred to Irv’s feelings about recording sessions, not performing opportunities. In Spring 2011, Irv seemed more determined that we let him rest his chops, proclaiming the release of yet another CD (Duke’s Mixture) at the Dakota Jazz Club to be his “Retirement Party.” Shortly thereafter, he was back playing for the Dakota’s Friday Happy Hour with Peter Schimke.  Then came the May 2012 “Retirement Party” at the Dakota, followed by more happy hours, and a special guest performance in spring 2013 with Estaire Godinez at the Museum of Russian Art.  And still he held weekly happy hours at the Dakota, which in early 2014 saw a cast change — now a trio with guitarist Steve Blons and bassist Billy Peterson. Later that summer, Irv released a studio recording (Then Was Then, Now Is Now) with a special performance at the Museum of Russian Art — an early 95th birthday present, soon followed by another party at the Dakota. And within the next year, Irv had yet another recording ready, Pinnacle (2015), released ahead of his 96th birthday. Irv has not only continued his weekly Happy Hour gigs at the Dakota, but in 2016 was honored as spotlight artist at Jazz Central, headlined at the Dunsmore Room at Crooners Lounge, and celebrated number 97 at the Dakota.

With another birthday coming up late next week, another party is in order. Irv Williams’ 98th birthday celebration featuring Steve Blons and more friends will be held once again at the Dakota in downtown Minneapolis, on Sunday, August 13. 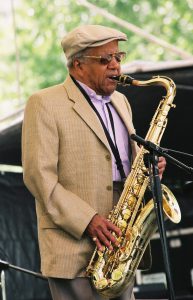 Raised in Cincinnati and Little Rock, Irv Williams started out on violin, switched to clarinet at age 11 to counter the effects of bronchitis, and soon moved on to saxophone. Early in his career, he played in bands behind Ella Fitzgerald, Fletcher Henderson, Mary Lou Williams, and  Billy Eckstine at  such venues as the Apollo Theater and the Howard Theater. Irv first performed in the Twin Cities as a clarinet and sax player with the Navy during Word War II. Turning down invitations to play with Count Basie and Duke Ellington, he stayed in the Twin Cities where he taught in the St Paul Public Schools and played with the late Reginald Buckner. And here at home, Williams has played at every jazz venue, past and present, including the old Flame Bar where he was often back to back with such stars as Sarah Vaughn, Dizzy Gillespie, and Johnny Hodges. The first jazz musician to have his own “Irv Williams Day” granted by the State of Minnesota (1984), he has been inducted into the Minnesota Jazz Hall of Fame and was pictured on the “Celebrate Minnesota” official state map in 1990. At the KBEM Winter Jazz Festival in 2005, Irv was one of three recipients of Lifetime Achievement Awards. Throughout his eight-decade career, Williams has focused on the Great American Songbook and the tenor sax as a solo vehicle. His knowledge of the idiom is legendary and fellow musicians marvel at his ability to play any song in any key. Noted Matt Peiken (St. Paul Pioneer Press), “Veteran saxophonist Irv Williams has always been about sweetness not power, and he’s still gigging strong.” 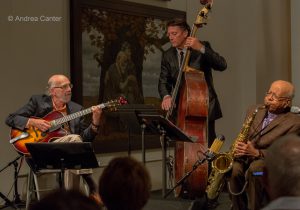 Four years ago, then 94-year-old Irv had a conversation with videographer/producer/ Wells Piano co-owner Jason Rupert regarding the possibility of archiving all of his recordings. It was a great idea that got sidetracked when Irv decided to record yet another CD, yielding Then Was Then, Now Is Now (Wells Pianos), released in summer 2014.  Recorded at Essential Sessions Studios over the period of a few months, Irv and guitarist Steve Blons simply played whatever came to mutual minds. Producer Rupert recounts the process of the new recording in his liner note. “The concept for the music was to capture an intimate conversation between two friends who enjoy playing together. We had our first session in April 2014 and about every other week for the next two months we went into the studio to record whatever pieces Irv and Steve wanted to play.” The music was originally recorded as a sax/guitar duo, and Rupert noted that “we ended up with an embarrassment of riches to sift through. After assembling the specific tracks and arrangements worked out by Irv and Steve, we called Billy to help round out the tunes with some bass lines.” Nevertheless, it is hard to imagine, on listening, that these 18 tracks were not a three-way conversation in the first place, like their Happy Hour sessions at the Dakota. 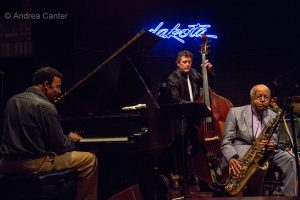 A year later in 2015, the archival project had one more addition, aptly titled Pinnacle, a trio set with Blons and Peterson. Of particular significance are the excerpts from the late Leigh Kamman’s interview with Irv, which became the broadcaster’s last recorded interview, filled with historical anecdotes and typical Irv humor.

Is he finally done recording? Maybe. Maybe not. He clearly is not done playing!

You often catch Irv and his trio for Friday happy hour at the Dakota. And you can participate in yet another birthday celebration — and Irv very likely will need help dousing 98 candles.