The History of the Twin Cities Jazz Festival

In 1999,  jazz promoters Steve Heckler and Steve Adams recorded several great Minnesota artists including Shirley Witherspoon, Gene Adams and Ronny Loew.  But with so many changes happening in the music industry we found ourselves without a path to promote these artists.  Steve Heckler came up with the idea to create a free community event (not a jazz festival) so folks could see for themselves how great jazz really is.   Steve convinced the Minneapolis Downtown Council to allow a one-day jazz event at Peavey Plaza as part of the Alive After Five music series. The projected attendance was 300. At the same time, the new marketing director of Jazz88FM, Kevin Barnes, strongly felt a jazz festival was needed in our community. With the support of Jazz88, great weather and word of mouth, over 3,000 attended the free one-day event at Peavey Plaza. 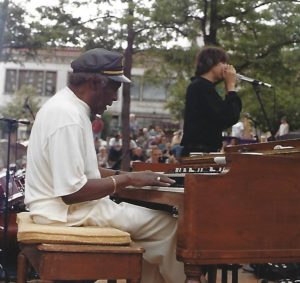 Steve Heckler, Steve Adams and Kevin Barnes decided to explore the possibility of creating a new jazz festival in the Twin Cities. With  support from the Minneapolis Downtown Council, Jazz88FM, and several jazz lovers, the Twin Cities Jazz Festival (then called the Hot Summer Jazz Festival) began.  Brother Jack McDuff, Bernard Purdie and Howard Levy headlined the one-day event at Peavey Plaza. Pianist Jon Weber, who happened to be in Minneapolis for another event, was asked to assist. He ended up saving many sets that otherwise wouldn’t have happened and became the Jazz Festival’s resident pianist.

The Hot Summer Jazz Festival becomes a 501(c)(3). Ken Davis BBQ Sauce steps us as the first sponsor of the Festival. Many more joined in and Clark Terry was booked to headline the event. Two more days were added to create a three-day festival. In addition to Clark Terry, the schedule included Butch Thompson, Ben Sidran, Irv Williams, Bruce Henry and the Navy Great Lakes Big Band. The crowd was so large that the Minneapolis Downtown Council insisted that for following years we close down Nicollet Mall, and create a much larger main stage in the pond area.

The pond at Peavey Plaza in downtown Minneapolis was drained and the first main stage of the Festival was created. Headliners included Monty Alexander, Tiger Okoshi, Tony Monaco, the Peterson Family, Nachito Herrera and Ginger Commodore. Other cities partnered with the Jazz Festival including Hopkins, Plymouth and Eden Prairie. Nicollet Mall is closed between 11th and 12th and a second out door stage is added. The Millennium Hotel, two blocks away, becomes the official Hotel Sponsor and a third stage is added in the lobby. The Millennium Stage hosts the after-hours jam stage at the Festival.

Headliners included Joey DeFrancesco, Red Holloway, the Heatin’ System with Melvin Rhyne, Connie Evingson, Sue Tucker, Doug Haining and Salsa del Soul. A major storm hit the event just before Joey’s set. Three of our vendor tents were destroyed and we found out that the pond area where our main stage sits was not constructed to drain quickly. The entire area had over 5 inches of water. The pouring rain and the rising water did not stop Joey and his band. He kept playing and finished his set with fans splashing about (we learned there are die-hard jazz fans). Following that set, Joey, the Heatin’ System, Red Holloway and Tony Monaco jammed at the Millennium Hotel until 2AM, an immortal moment of the Festival that began the jam sessions. The Dakota Foundation in partnership with MacPhail School of Music hosted a youth stage. For the next twelve years, over 125 youth perform at the Festival annually and will continue to do so.

The Festival expands to St. Paul at Mears Park with Lew Tabackin headlining.  Headliners at Peavey included Jimmy McGriff, Hiromi, Von Freeman, David “Fathead” Newman, Kristin Korb, Arne Fogal and Billy Carrothers. The Dakota Jazz Club moves to 10th & Nicollet Mall, one block from Peavey and became a partner to the Festival, booking Arturo Sandoval and Bettye Lavette. Orchestra Hall (next to Peavey) also became a partner, booking the Dave Brubeck Quartet. As the event grew, a decision was made to call it the Twin Cities Hot Summer Jazz Festival.

Through a partnership with the Dakota and Rose Presents, Return to Forever performed at the Orpheum as part of the Jazz Festival. Headliners at Peavey included Charmaine Neville and Tony Monaco. Headliners at Mears Park included Ravi Coltrane and Jerry Gonzales.

In October of 2008, during a board meeting, a decision was made to end the Twin Cities Jazz Festival. The economy was changing and we had no funding. Two months later, however, Joe Spencer, Director of Arts and Culture with Mayor Chris Coleman’s office contacted Steve Heckler inquiring who was lined up for the 2009 Twin Cities Jazz Festival. Steve explained that the event had no sponsors or funding and that he would not be able to produce the event. Joe responded, “Yes you are.” The City of St. Paul, and Lowertown in particular, was experiencing a rebirth and they would not let an event that was drawing over 20,000 people go away. (Mears Park happens to be in the center of Lowertown). The City offered to help the Jazz Festival connect with potential funding sources if we would keep it going. How could we refuse. That same month, the Twin Cities Jazz Festival Board was brought back together with the agreement that they would try to pull something together. With no funds or prospects for any funding it did not look plausible that the jazz fest would continue. But soon after things starting happening. Within three weeks, several major St. Paul sponsors came forward as did several large donors and the Jazz Festival was back in business and better then ever. Unfortunately, the Festival could not obtain sponsors in Minneapolis, so the Twin Cities Jazz Festival would now only be in Mears Park held over a three-day period.

The Twin Cities Jazz Festival was now held only in Mears Park, Lowertown. As part of the rebirth of the Lowertown neighborhood, the Bulldog and Barrio opened next to Mears Park. Eight Lowertown venues joined together to form the Lowertown Entertainment District (LED) to promote Lowertown and partnered with the festival increasing sponsors and stages. Headliners included Allen Toussaint and Esperanza Spalding, creating the largest crowd ever for the Twin Cities Jazz Festival. Prince made an appearance to see Esperanza and invited her entire band to Paisley Park following their set. Mayor Chris Coleman announced from the stage the importance of the arts and music festivals to the overall vibrancy and economy of the city. The Minneapolis Star-Tribune and City Pages named the Twin Cities Jazz Festival the best festival in the cities.  Jam sessions were now at the the Artists Quarter

Thanks to major support from the Minnesota State Arts Board, a second and third outdoor stage are added. Over 150 Minnesota musicians performed. Downbeat Magazine writer John Ephland attended the event and a great article followed. Gary Burton headlined along with Danilo Perez and Deodato. Additional clinics were added at McNally Smith College of Music, which continue to be free and open to the public. Miguel Hurtado, who as a child performed at the Festival and graduated from the Manhattan School of Music, performed at the event.

With even more support from the Minnesota Arts Board, 15 club stages were added, playing continuous jazz all weekend. Over 250 Minnesota musicians performed. The partnership with the Saint Paul Libraries expanded to include 4 performances at various branch locations. The Bad Plus with special guest Joshua Redman, along with Delfeayo Marsalis, produced the largest crowd ever for the Twin Cities Jazz Festival. Other headliners included Francisco Mela and the Cuban Safari, Araya Orta Latin Jazz Quartet and Luca Ciarla from Italy.

Yet another stage is added at the newly refurbished Union Depot Station. The Green Line, a new train that connects Minneapolis to St. Paul, opens two weeks before the jazz festival with the last station at the Union Depot in the heart of Lowertown. Thanks to a Minnesota State Arts Board grant the jazz festival books music at five clubs/venues along the Green Line. Wacouta Street is closed from 7th Street to Kellogg Blvd opening a new and exciting Jazz Market with food and art vendors. Headliners include Branford Marsalis, Dianne Reeves, Melissa Aldana, Joe Krown, Walter Wolfman Washington and Francisco Mela. Francisco Mela is named Artistic Director of the Twin Cities Jazz Festival.

CHS Field (Saints Baseball) opens in Lowertown. The Twin Cities Jazz Festival hosts Dr. John and the Nite Trippers as the first concert in the stadium attracting upwards of 7,000 people. Headliners include Dave Holland, Chris Potter, Nicholas Payton, Francisco Mela, Marquis Hill and Araya Orta. Thanks to the support of sponsors, foundations and all the folks who support the arts, the festival expanded with stages in Como Park, Frogtown, Highland Park and Rice Park. Over 350 Minnesota artists are booked for the festival at over 30 partnering venues. In addition over 150 youth perform.

Dee Dee Bridgewater, Houston Person, Tia Fuller and Nayo Jones headlined the festival.  The weather was perfect and we saw record crowds.  All headliners hosted master classes/clinics at MacPhail School of Music (McNally closed).   Over 100 youth performed at the festival and attended the master classes.

Nnenna Freelon, James Carter Organ Trio, Jose’ James, Grace Kelly, Mayito Rivera and Jorge Pacheco headlined the festival.  Although the forecast the night before was 80% chance of rain, no rain hit the fest and we again had record crowds.  MacPhail and Dakota Foundation hosted the youth performance stages where over 100 youth performed.  TPT opened as a new venue hosting vocal jazz.  Unfortunately the Vieux Carre, owned by the Dakota Jazz Club, closed two days after the jazz fest.

A year to remember.  Although our festival was cancelled,  thanks to our generous sponsors, grantors and donors, we were able to kick off a live virtual weekly series called Jazz Fest Live.  We also were able to raise funds to support youth education and clinics.  As I write this we’re not sure what 2021 will bring.  Fingers crossed.

Due to the uncertainty of Covid, we could not host the live festival in June.  We were, however, able to continue our weekly Jazz Fest Live virtual concert series.   The weekly audience for Jazz Fest Live grew to over 65,000 with over  65% of the folks tuning being from states other than Minnesota.  We decide to offer a virtual option for the live 2021 and 2022 festival.   In September, we’re finally able to host a live festival.   The event is way scaled back to keep it safe for all.  Headliners included Kenny Barron, Emmet Cohen featuring Patrick Barkley, Delfeayo Marsalis and Moore By Four.