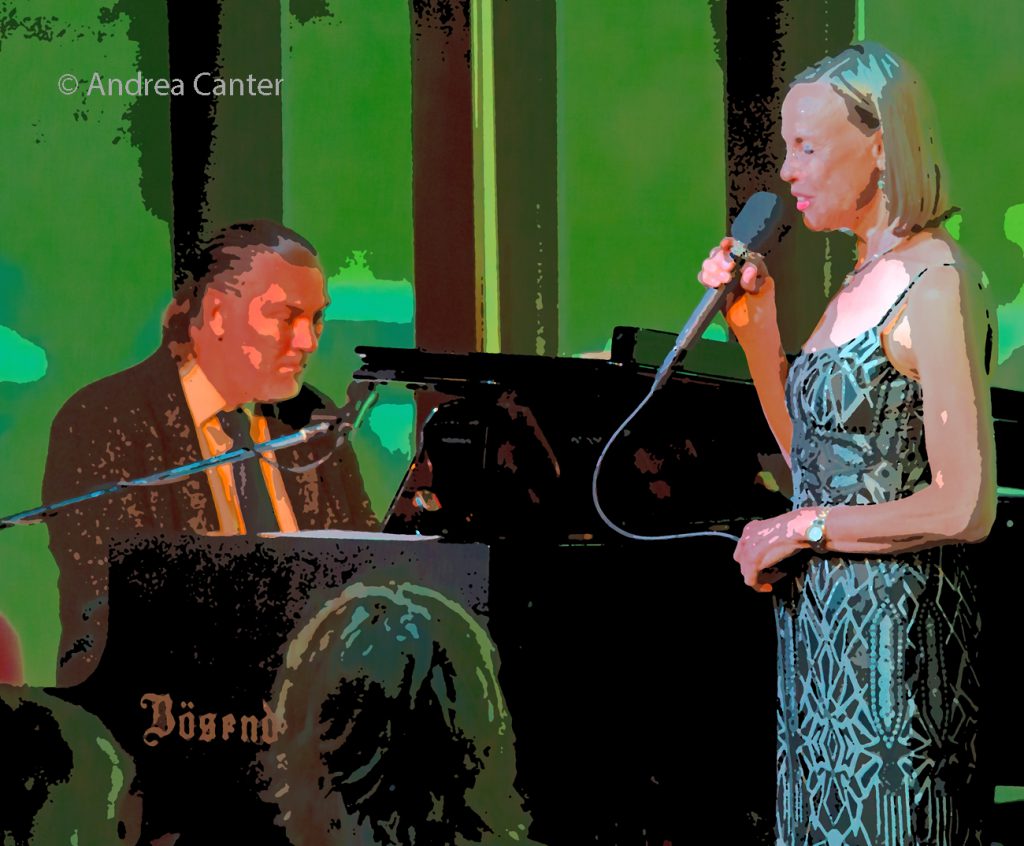 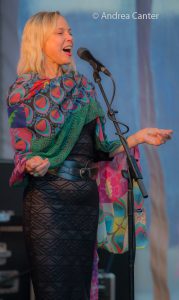 A native of Hibbing in northern Minnesota’s Iron Range, Connie Evingson grew up listening to her father’s records of Duke Ellington, Count Basie, Ella Fitzgerald, Sarah Vaughan, Joe Williams, Tony Bennett, Lambert, Hendricks and Ross, and later Peggy Lee and Shirley Horn. Influenced by these early muses as well as the musical icons of her generation (the Beatles, Joni Mitchell, Bob Dylan, Sting, Bonnie Raitt), Connie’s eclectic tastes were soon evident, from her first club gig at the old Night Train in St. Paul to a brief stint with the Minnesota Vocal Jazz Ensemble before she joined Moore By Four in 1986. With Moore by Four, Connie performed and toured the world throughout the late 80s and 90s, often opening for the biggest stars in music. In the past decade, her career as a soloist has included nine CDs for Minnehaha Music, most releases charting on Jazzweek’s Top 50 for extended periods. Long regarded as among the top echelon of jazz artists in the Midwest, recipient of two McKnight Artist Fellowships, and nominated as Jazz Week’s Vocalist of the Year in 2005, Connie’s back-to-back recordings of hot club swing (Gypsy in My Soul, Stockholm Sweetnin’) brought renewed attention to the genre and led to performances at Jazz Alley in Seattle, Blues Alley in Washington, DC and appearances in Europe. 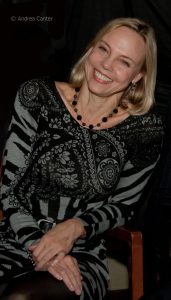 But Connie Evingson has never been one to rest on the laurels of a popular style, and even while Gypsy in My Soul was climbing the charts in 2005, she was delving into a new project, the songs of Dave Frishberg. Little Did I Dream (2008) was arguably one of Connie’s most successful recordings, gaining accolades from local and national press. “Little did I dream that one day I’d get to record an entire album of his songs—with him at the piano,” said Connie. Connie’s 2012 Sweet Happy Life showcased her “framing and saluting [Norman] Gimbel’s work with her delightful voice, superb diction, timing and phrasing” (All About Jazz). In addition to curating Jazz at the Jungle productions over the past five years and heading a monthly Jazz in the Lounge gig at the Minneapolis Woman’s Club, Connie appears regularly at the Dakota, Vieux Carré, and Crooners Lounge, and, in June 2013, made her Jazz at Lincoln Center debut in Michael Feinstein’s “Swinging With the Big Bands,” featuring Wynton Marsalis. Connie’s recent projects include a return to hot club repertoire with All The Cats Join In, recorded with the John Jorgenson Quartet and released at the Dakota in fall 2014, as well an ongoing series of productions at the Jungle Theater with pianist Jon Weber. She has also assembled what she has dubbed the Minnehaha Hot Club, performing frequently at Vieux Carré.  Connie is a two-time recipient of both the McKnight Fellowship Award for Performing Musicians and the Minnesota State Arts Board Artist Initiative Grant. 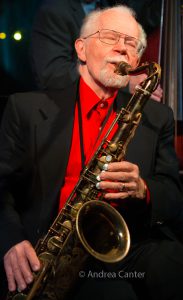 A native Canadian who emigrated to England in early childhood before landing in New York City, Dave Karr got hooked on jazz by listening to some of the great jazz legends, including Charlie Parker and Dizzy Gillespie. Moving to the Twin Cities in his twenties, Karr has been a fixture on the Twin Cities jazz scene for more than 60 years, composing and producing music for radio and TV since 1970. With Mark Henderson, he formed Mark & Dave Music and Sound Design in 1996. Karr has performed with numerous bands, symphony orchestras, Broadway shows, and recording sessions. Around town Dave has performed frequently with his own quartet and backing other musicians at the Dakota, Artists Quarter and other venues, ranging from vocalists (Connie Evingson, Lucia Newell) to small bands (Pete Whitman’s X-Tet) to big bands (Jazz Mn Orchestra, Andrew Walesch Big Band). Most often heard on tenor, flute, and clarinet, Karr also breaks out the baritone on occasion. Among highlights of the last few years, Dave received a McKnight Grant, headlined a Jazz at Studio Z clinic and concert, led a trio with Adam Linz and JT Bates at the Icehouse, has appeared with his quartet and in duo with Sam Miltich in the Dunsmore Room, and has performed frequently with vocalist Connie Evingson in her Jazz in the Lounge and Jazz at the Jungle series. 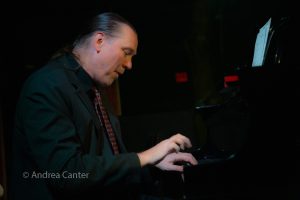 As a toddler in Milwaukee playing a toy organ, Jon Weber alrea dy displayed both perfect pitch and memory. By age 6 he had memorized 2,000 songs from his grandmother’s old piano rolls. A self-taught musician, Weber took off two years from piano during his teens to develop counterpoint in his left hand by playing guitar. Returning to the piano, Jon and his quintet opened for Pat Metheny, Buddy Rich, Freddie Hubbard, and Stanley Turrentine at major summer jazz festivals. Since moving to Chicago in 1987, and then to New York a few years ago, Jon has performed around the world as well as in the recording studio. In addition to his remarkable chops, Jon Weber is well known for his incredible music knowledge. He’s been the subject of profiles by CNN, CNBC, Black Entertainment TV, Bravo/Arts, National Public Radio, and Voice of America. In New York, he has been a regular performer at the 92nd Street Y jazz series and at the Algonquin Hotel; performed last winter at the Metropolitan Room with local songbird Maud Hixson as part of a tribute to songwriter Mickey Leonard; and is the host of the Piano Jazz spin-off, Piano Jazz: New Generation on National Public Radio. He’s become a fixture of the Twin Cities Jazz Festival, hosting evening jams at the Artists Quarter through 2013 and returning to host jams at the new Vieux Carré during the 2015, 2016 and upcoming 2017 festivals; Jon performed in several configurations at the 2016 festival, leading the jam sessions, performing with Delfeayo Marsalis on the Main Stage, and with Francisco Mela in a quartet on the Sixth Street Stage. He also tangled with Butch Thompson in what has become an annual Stride Night. 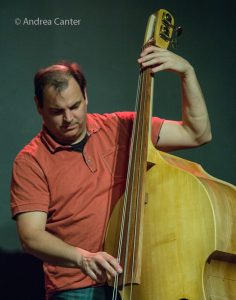 Chris Bates and his brother, drummer JT, grew up with jazz, sons of trumpeter/bandleader Don Bates. He began bass lessons in 4th grade and progressed to jazz studies at the University of Wisconsin-Eau Claire before returning to the Twin Cities to study with Anthony Cox. A member of the 1990s ensemble, the Motion Poets, Chris was a 1999 McKnight Composer Fellow, and often lends his compositions to the many ensembles that he juggles throughout his busy performance schedule. Over his career, he has played with Mose Allison, Lee Konitz, Joe Lovano, Steven Bernstein, Howard Levy, Michael Attias, Ira Sullivan, Bill Carrothers, Eric Alexander, Ari Hoenig and Tim Sparks, among others. In addition to his local ensemble work (Atlantis Quartet, Red Planet, How Birds Work, Klezmerica, Enormous Quartet, Framework, Leisure Valley, Zacc Harris Group, Dean Granros’ Tall Tales, Bill Simenson Orchestra, Laura Caviani Trio, Fall of the House of Usher, Sister Shaw) and leading Red 5, Good Vibes Trio, and Inventions and Dimensions Trio, he has played solo concerts using both acoustic and electronic instruments, and appears on over 30 recordings. In spring 2013, Chris launched a monthly improvisation series at Jazz Central Studios in Minneapolis, “Magica Improvisado.” Chris also teaches private bass lessons and is an instructor at the University of Minnesota Morris and Shell Lake Jazz Camp.

The Jungle Theater is located at 2951 Lyndale Avenue South in Minneapolis’ Lyn-Lake neighborhood. Tickets are $30, and are available at the Jungle Theater box office, 612-822-7063 and at www.jungletheater.com.