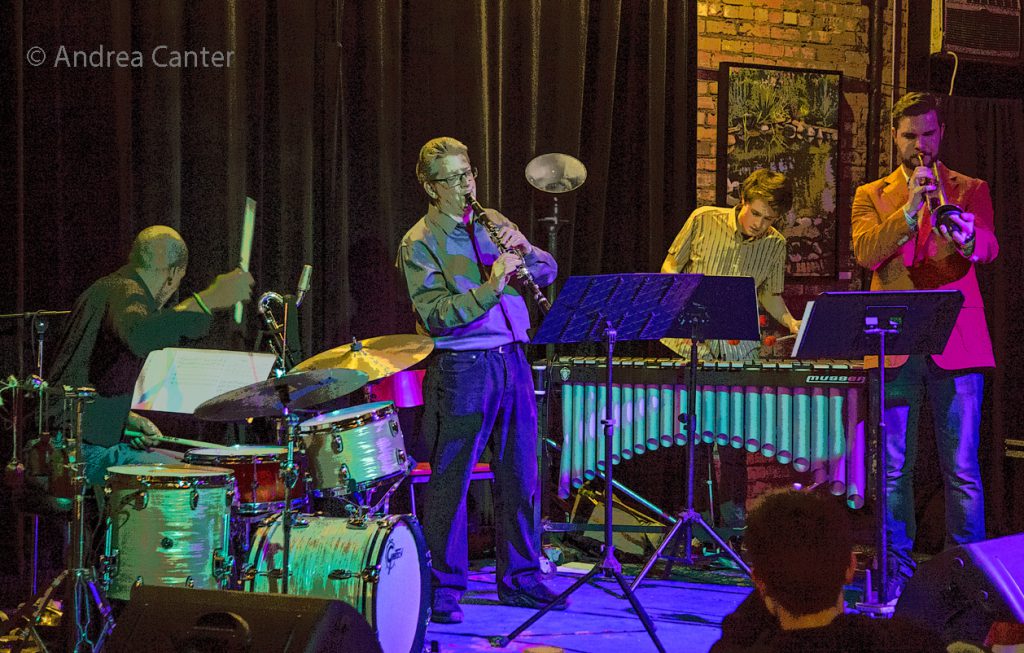 Zacc Harris’ series of creative jazz concerts, Jazz at Studio Z, continues on March 11 with the No Territory Band, lead by drummer Davu Seru and featuring Noah Ophoven-Baldwin (trumpet), Pat O’Keefe (clarinets), Nathan Hanson and Scott Fultz (saxophones), and Levi Schwartzberg (vibes). This evening, the band will present  two sets of music starting at 7 pm,  with a master class at 6 pm.  For this show’s master class, Davu will present on “Composition. Improvisation. Memory.” 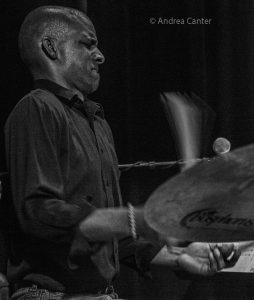 Respected internationally as a free jazz drummer as well as his performances in  jazz, rock and avant-garde improvised music, Davu Seru is known for his “big ears.” His percussion style is notable for its attention to sound, silence and melodic line as much as rhythmic pattern. The Minneapolis native has worked with Charles Gillett, Elliot Fine, Paul Metzger, Anthony Cox, Dean Granros, Dean Magraw, Wendy Ultan, Adam Linz, Evan Parker, George Cartwright, James Buckley, Taylor Ho Bynum, and Nicole Mitchell. In addition to leading No Territory Band, he currently plays with Merciless Ghost, Milo Fine, J. Otis Powell‽, Dean Magraw (monthly duo at the Black Dog), and more; curates a monthly show at Khyber Pass Cafe; and is a member of the composer-improviser collective orchestra, Cherry Spoon Collective. Davu studied at the U of M and is a published author and professor of African American Literature and Culture. He has received awards from the American Composers Forum (Minnesota Emerging Composer Award) and the Metropolitan Regional Arts Council, and commissions from the Zeitgeist Ensemble and Walker Art Center. He is a new Artist in Residence at Studio Z. 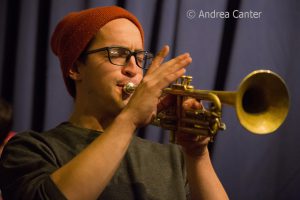 One of Pat Moriarty’s star pupils at Roseville Area High School, Noah Ophoven-Baldwin was on the front line of the U of M Jazz Ensemble I, and since graduation a few years ago, has also appeared regularly in the trumpet section of the Adam Meckler Orchestra. He’s also played with Adam Linz, Jake Baldwin, Nelson Devereaux, the Brass Barn Polka Band, Davu Seru, and with Pat Moriarty and Ellen Lease in Resurrection. Noah is a co-founder of the Minneapolis-based musicians’ collective, Six Families. Of his former student, Pat Moriarty notes that “he’s an excellent player but his creativity, imagination, and thorough knowledge of the entire history of jazz trumpet, set him apart from other young guns.” 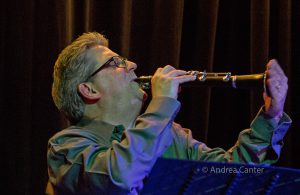 Multi-reed artist Pat O’Keefe is Co-Artistic Director for the contemporary music ensemble Zeitgeist, based in St. Paul. A graduate of Indiana University (BM), the New England Conservatory of Music (MM), and University of California San Diego (DM), Pat has performed and recorded with noted new music groups around the country, including SONOR in San Diego, the California E.A.R. Unit, the Cleveland New Music Associates, and Ensemble Sospeso in New York; he was the principal clarinetist for five seasons with the Augusta (GA) Symphony. Currently Pat also performs with the free improv group AntiGravity and with Brazilian ensembles Brasamba, Batucada do Norte and Music Mundial in the Twin Cities; his resume includes concert appearances with George Lewis, Wadada Leo Smith, Fred Firth and more, as well as studies of Turkish and Brazilian music. 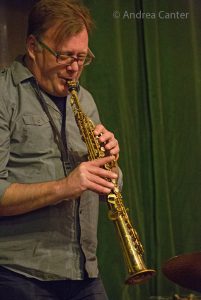 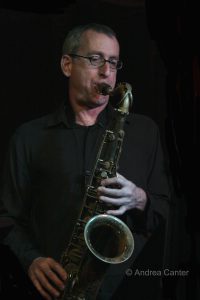 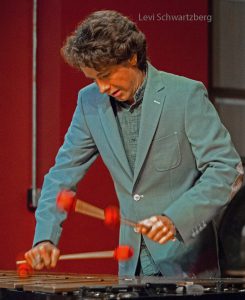 Levi Schwartzberg is only a junior at the U of M, but he’s been perfecting his four-mallet technique on vibes since high school days. He is also an accomplished pianist, currently performing on both instruments in the U of M Jazz Combo. A graduate of Minneapolis Southwest High School who participated for two years with the Dakota Combo, Levi has led his own ensembles at Jazz Central, Black Dog and Khyber Pass Cafe as well as performing with Adam Linz’s Le Percheron, Will Kjeer, Steve Kenny, the Charlie Lincoln Group, Sound Skirmish, and more.

Davu assembled No Territory Band in 2016 “to dialogue with some of the composers most influential to his development as a composing musician–namely Anthony Braxton, Andrew Hill and George Russell–while maintaining the integrity of jazz and improvised music as folk forms of expression. The compositions self-consciously play in blues, African polyrhythm, and chorale-like arrangements for horns. But in all cases ensemble members are free to treat idiom, form, and score as rules meant to be broken.” The Studio Z concert will include all original compositions by Davu. The pre-concert talk and demonstration “will focus on composing, which only implies familiar musical idioms–leaving the problem of authenticity and cliched language to the improviser.”

Studio Z is located on the second floor of the Northwestern Building at 275 E 4th Street in St. Paul’s Lowertown. Tickets ($15) at the door or $10 in advance at www.studiozstpaul.com. The pre-concert presentation is free, and attendees receive the advance ticket price for the concert.