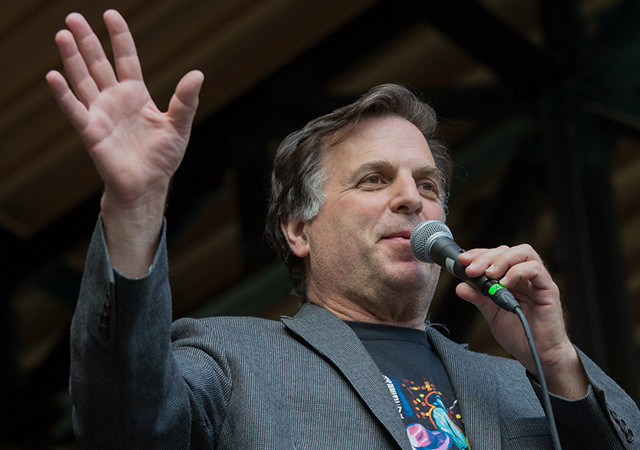 This article originally appeared on MinnPost.

The story of the Twin Cities Jazz Festival is full of ups and downs. It began in 1999 as a one-off afternoon of music on Peavey Plaza in Minneapolis. About 300 people were expected. More than 3,000 came.

A 501(c)(3) by 2001, the festival added sponsors, headliners and stages. It survived a storm in 2003, expanded to St. Paul’s Mears Park in 2004 and straddled two cities for five years. In late 2008, it nearly died. The recession had dried up funding and scared off sponsors. By then, St. Paul had gotten used to having tens of thousands of people crowd into Lowertown in June to hear that crazy jazz music. The city stepped up, and Jazz Fest has been a St. Paul summer staple ever since.

In recent years, it has drawn upwards of 40,000 people to Mears Park and Lowertown for three days and nights of music, all free.

A constant from the start has been Steve Heckler, founder, executive director and CEO. Jazz Fest is the gig closest to his heart, but it hasn’t been his only gig. He founded an organization called Expo USA, which worked to bring a World’s Fair to Minnesota. He spent eight years as director of the Festival of Nations. He’s the founder and executive director of the Lowertown Funk & Blues Festival, currently scheduled for July 17-18, but that could change, like everything has changed.

Heckler is a cheerful person with lots of ideas and boundless energy. He is also a resilient person. Jazz Fest’s history speaks to that. We talked by phone on Thursday morning. This interview has been edited and condensed.

MP: This hasn’t been your best spring ever. So far, you’ve had to postpone two festivals and a series.

Steve Heckler: I’ve never gone through anything like this in my entire production life.

SH: We have a new date for that. October 18. It’s still at the Granada [the former Suburban World in Uptown], with the same artists, and Delfeayo Marsalis, though we’ll have to see how he’s doing after his dad passed away. [Ellis Marsalis died on April 1 from coronavirus complications.] Cuban pianist Jorge Pacheco is on hold for that date.

MP: Next was “Keep Music Live,” a series of concerts that would have been livestreamed from Crooners five nights a week, starting April 3. You had already raised $25,000 to pay the musicians.

SH: The planning for that happened before the stay-at-home order came in [on March 25]. By then, the restaurants were closed. [Gov. Walz closed restaurants and bars on March 16.] The idea was to set up a stage at Crooners where musicians could keep their social distance and stay safe. They would perform in front of nobody. We hired a production group to film and stream the concerts. We wanted to support our musicians and production folks, who are really hurting right now. We were doing everything we could possibly think of.

When I reached out to folks to chip in, I could not believe we raised that much that quickly. It was heartening to see people step up to the level they did. It was all private individuals.

When the stay-at-home order came in, obviously we couldn’t bring the musicians to Crooners, and we weren’t set up for a different scenario at the time. So here’s what we did. We paid all the musicians who were booked. Every musician who was booked has been paid by now. I personally mailed out close to 40 checks. It was a great feeling to do that.

As soon as the stay-at-home is lifted, they will come in and do the live shows. We’re hoping this starts in mid-May or the end of May. Even if the restaurant is still closed, we can do the shows. But we’re not going to jeopardize our musicians.

MP: This would have been the festival’s 22nd consecutive year. It’s the first time you have needed to postpone.

MP: Tell us what it was like to make that decision.

SH: There wasn’t any real choice here. We held off as long as we could. The city of St. Paul had canceled all festival permits into May. We could see what was happening. We were watching the news like everyone else, and a large gathering at this time did not seem like a smart move.

Then events happening in June started canceling. Pride canceled, which is the same weekend as Jazz Fest. Rock the Garden canceled. We didn’t feel there was any safe way to present our festival in an outdoor space. We had a board meeting on Zoom and made the tough decision. No one argued.
In a way, the writing was on the wall in March, when many events were canceled 24 hours before they were supposed to happen. We knew we couldn’t cancel Jazz Fest with 24 hours’ notice. We would be bankrupt if that happened. If we set up all the tents, all the stages, paid all of the musicians and suddenly we didn’t have an event … And it’s more than musicians. We have staging companies. The power company. Sound companies. All the people that are part of Jazz Fest. And the food trucks! What about them?

That’s when our initial discussions started. We had to be prepared.

Then the restaurants closed. We said, “Hey, wait! If the restaurants are closed, how the hell are we going to get a large gathering going?” Everyone at that time was, “Let’s watch and see what happens.” But that’s when we decided to be proactive. We started looking into livestreaming. The Crooners series came out of that.

SH: We were not going to cancel Jazz Fest and do a “see-you-next-year” kind of thing. Personally, I couldn’t live with that. There were too many musicians involved, too many production people. We were trying to come up with unique ideas, not just click-on-a-YouTube-video-and-watch-the-show. That’s not what Jazz Fest is. It’s about experiences. It’s live, organic, in the moment. That’s the power of music.

With the Crooners series on hold, which will resume, we talked to a couple of sponsors and decided, “Why don’t we do a series from people’s houses?” A couple of our tech people donated time to help us figure how to do this the best we can.

Between us and AARP, our main sponsor, we came up with the idea of doing a weekly jazz concert, free and open to everyone. We’re calling it “Jazz Fest Live.” It’s a show you might see at a club, with some interaction. It’s going to be every Thursday at 6 p.m. Next week is Nayo Jones. The plan is to stream shows live, then put the videos on our website.

MP: You were going to announce the headliners for summer’s Jazz Fest at the winter Jazz Fest. Care to share?

SH: Absolutely! We had the Kenny Barron Trio. Matthew Whitaker [a teenage jazz piano prodigy who was featured on “60 Minutes” in February]. Paquito D’Rivera and his Dizzy Gillespie tribute band with Cyrus Chestnut, Eric Alexander and Terell Stafford. All of these major musicians were about to be here. That was tough.

MP: You’re calling this year’s Jazz Fest “postponed.” What does that mean?

SH: We’re going to have live streaming shows. We’d also like to have some kind of live show in September, if it’s allowed and if it’s safe.

I have no idea what that will be, where it will be or what it will look like. It probably won’t be a large gathering. It will be something different. But that’s our goal. Live streaming and some kind of live show in September.

Right now, we’re looking at how to maintain the future, not only of our festival but of the art form. All we can do is the best we can to keep this thing going at every level.

MP: How do you see the future of the jazz festival? And jazz itself?

What will we have in 2021 and 2022? What will be open? What will be here? I believe the festival will come together. But we may have to reconnoiter and approach it differently, depending on what has changed.

At the end of the day, this whole situation might help jazz. People might respect it more. We’ve been taking it for granted. Once there is an all-safe, I’m going to hit every jazz show I can. I’m going to hit every restaurant. When this eventually ends, people need to get up and go and support these events and places. Live jazz, venues and restaurants. When all is clear, we as a community need to get out and support them big time.

To all of our Jazz Fest supporters: We appreciate your standing by us and standing with us. For not giving up. We’re going to get through this, and jazz will go on.

This article originally appeared on MinnPost.