JAZZ FEST UPDATE – The 2020 Twin Cities Jazz Festival planned for this June is postponed, but in the meantime, we created JAZZ FEST LIVE, a platform that brings live jazz performances into your home every Thursday at 7PM CDT. We’re not giving up on our artists and all the folks who make these free civic events happen and hope you’ll do the same by continuing your support. Jazz Fest live is presented by AARP Minnesota and supported by the Minnesota State Arts Board, St. Paul Cultural STAR, HIWAY Credit Union, JAZZ88 and by folks like you who support live jazz.

Please stay tuned for more updates on the crooners series which will resume once the stay at home order is lifted.

Check back for artist updates soon!

Past Performances at Twin Cities Jazz Festival Include:

Honored by The National Endowment for the Arts as a 2010 Jazz Master, Kenny Barron has an unmatched ability to mesmerize audiences with his elegant playing, sensitive melodies and infectious rhythms. The Los Angeles Times named him “one of the top jazz pianists in the world” and Jazz Weekly calls him “The most lyrical piano player of our time.”  While still in high school. Kenny worked with drummer Philly Joe Jones and at age 19, he moved to New York City and freelanced with Roy Haynes, Lee Morgan and James Moody, after the tenor saxophonist heard him play at the Five Spot. Upon Moody’s recommendation Dizzy Gillespie hired Barron in 1962 without even hearing him play a note. It was in Dizzy’s band where Kenny developed an appreciation for Latin and Caribbean rhythms. After five years with Dizzy, Barron played with Freddie Hubbard, Stanley Turrentine, Milt Jackson, and Buddy Rich. The early seventies found Kenny working with Yusef Lateef who Kenny credits as a key influence in his art for improvisation. Encouraged by Lateef, to pursue a college education, Barron balanced touring with studies and earned his B.A. in Music from Empire State College, By 1973, Kenny joined the faculty at Rutgers University as professor of music. He held this tenure until 2000, mentoring many of today’s young talents including David Sanchez, Terence Blanchard and Regina Bell. In 1974 Kenny recorded his first album as a leader for the Muse label, entitled “Sunset To Dawn.” This was to be the first in over 40 recordings (and still counting!) as a leader. 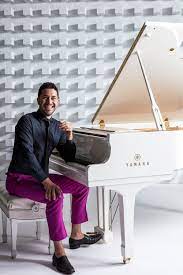 Multifaceted American jazz pianist and composer Emmet Cohen is in the vanguard of his generation’s advancement of music and the related arts. A recognized prodigy, Cohen began Suzuki method piano instruction at age three, and his playing quickly became a mature melding of musicality, technique, and concept. Downbeat observed that his “nimble touch, measured stride and warm harmonic vocabulary indicate he’s above any convoluted technical showmanship.” Cohen notes that performing jazz is “about communicating the deepest levels of humanity and individuality; it’s essentially about connections,” both among musicians and with audiences. He leads his namesake ensemble, the “Emmet Cohen Trio,” is a vibrant solo performer, and is in constant demand as a sideman. Possessing a fluid technique, an innovative tonal palette, and an extensive repertoire, Cohen plays with the command and passion of an artist fully devoted to his medium.