I remember when I first “found” pianist Lynne Arriale in a used CD bin, a few years after her first release (The Eyes Have It, 1994). I was certain this was the start of a new, hopefully long-term relationship to music. I was already a die-hard fan of be-bop and post-bop, particularly of jazz piano, of Oscar Peterson and Marian McPartland. Here was an artist, relatively young, a name I never heard before–modern but anchored in tradition, lyrical yet full of energy. Now I have followed Lynne through a number of Twin Cities’ gigs (at The Dakota, Crooners) and sixteen recordings, including her elegant, just-released The Lights Are Always On. 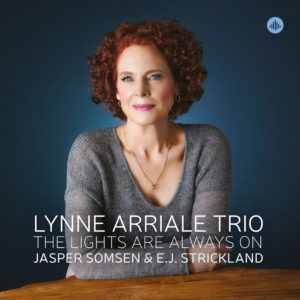 Getting the disclaimers out of the way: I’ve interviewed Lynne a number of times for Jazz Police; I’ve reviewed most of her recordings; I’ve even worked with her editing press bios; and one of my photos is included in the new CD artwork. And I openly admit to having a bias in favor of her music– and The Lights Are Always On gives me no reason to change that.

While Arriale’s three most recent releases (including 2018’s Give Us These Days and 2019’s Chains of Freedom) have been anchored by suites of original compositions with relevant covers, The Lights Are Always On is fully Arriale while continuing her focus on themes of gratitude, human rights, and hope. Lights is an homage, a reverent celebration and musical culmination of the global confusion and angst brought by the pandemic and political upheaval.  The album’s release also comes only a few months after the death of Lynne’s husband (“the love of my life”), to whom she dedicates the recording.  The melodies are beautiful and elegant, filled with both sadness and resolve more than the demands for action that underpinned Chains of Freedom.

Specifically, Lights is a 10-track tribute to the heroes of past two years of tumult on multiple fronts—to the “healers, caregivers, truth tellers, and defenders of democracy.”  All originals and relatively brief (around 4 minutes each), Arriale and company (bassist Jasper Somsen and drummer E.J. Strickland) make their points without overindulgence. Lynne’s compositions and melodies are deceptively simple, and although presented as separate pieces, these could be the 10 verses of one poem; throughout, it feels like it would easy to attach words to the notes.

The trio opens with “March On,” “celebrating activists who marched against racism, sexism, repression, notably in the 2017 Womens’ March on Washington and  those marching to protest the murder of George Floyd.”  It’s indeed a march, Arriale style, majestic and solemn but simultaneously uplifting, sparked by Strickland’s drum beats and crystal cymbal shimmers. The title track continues with the  sure-footed, melodic poetry Arriale is so known for. You sense that there is a lyric behind the notes. “Sisters” honors “courageous women around the world working to end gender inequity, oppression and abuse, often at the expense of their own welfare.” This is a bluesy, almost gospel swing with spiritual depth in its syncopations, with Lynne’s clean articulation playing against the strong rhythm of bass and drums. “Honor” nods to those who “told the truth” at great personal cost, and is particularly dedicated to Lt. Colonel Alexander Vindman, who testified against Donald Trump at the impeachment hearings.  Regally paced, this track features more shimmers from Strickland and resonant commentary from Somsen.

Lynne’s gently upbeat “Sounds Like America” presents the folk-ish sounds of recovery “as we progress to a time of healing.” It’s cautiously hopeful, with Somesen’s solo mirroring the role of vocalist; one searches for lyrics from Carl Sandburg. Arriale dedicates the “The Notorious RBG” to the late “indomitable” Supreme Court Justice Ruth Bader Ginsburg.  Like the soundtrack for an honor guard, the tune suggests low key rebellion with a high-stepping, unapologetic swing that captures RBG’s spirit—intelligent, brave, sure, determined.

“Into the Breach” references the January 6 2021Capitol Insurrection) with an ominous melody. Strickland offers rumblings of the madness to come without ever landing “in the breach;”  Somsen’s solo starts as a slow rise but falls back, as if retreating underground. Lynne dedicates “Walk in My Shoes” to Congressman John Lewis “the sharecropper’s son who became a civil rights icon.” The track is filled with dignity and resolve, with a smoldering in the background from bass and especially drums that ultimately fades. The opus concludes with “Heroes,” a gorgeous melodic nod to the heroes, suggesting to the listener that not only are these true heroes but also truly human, real people elevated by response to circumstance.

With similar pacing across the tracks, we hear the angst without the anger, resolve without desperation. These fires are smoldering if no longer burning; this is the aftermath, not the chaos; reflection, not insurrection. Not a direct call to action nor an overt protest, The Lights Are Always On offers calm in midst of a storm that is not yet really in its aftermath, a sense of dignity needed in the swirl of continuing chaos, anger, distrust and anxiety. In a way, The Lights Are Always On sums the passions of the two previous releases, Give Us These Days and Chimes of Freedom. And following Chimes, which musically and thematically seemed to offer more of a challenge to us to address threats to freedom, Lights is perhaps the eye of the storm, a calmer reflective and thankful sea, cautious in offering hope for future but hopeful nevertheless. We can only hope that the next offering from Lynne Arriale can be more festive.