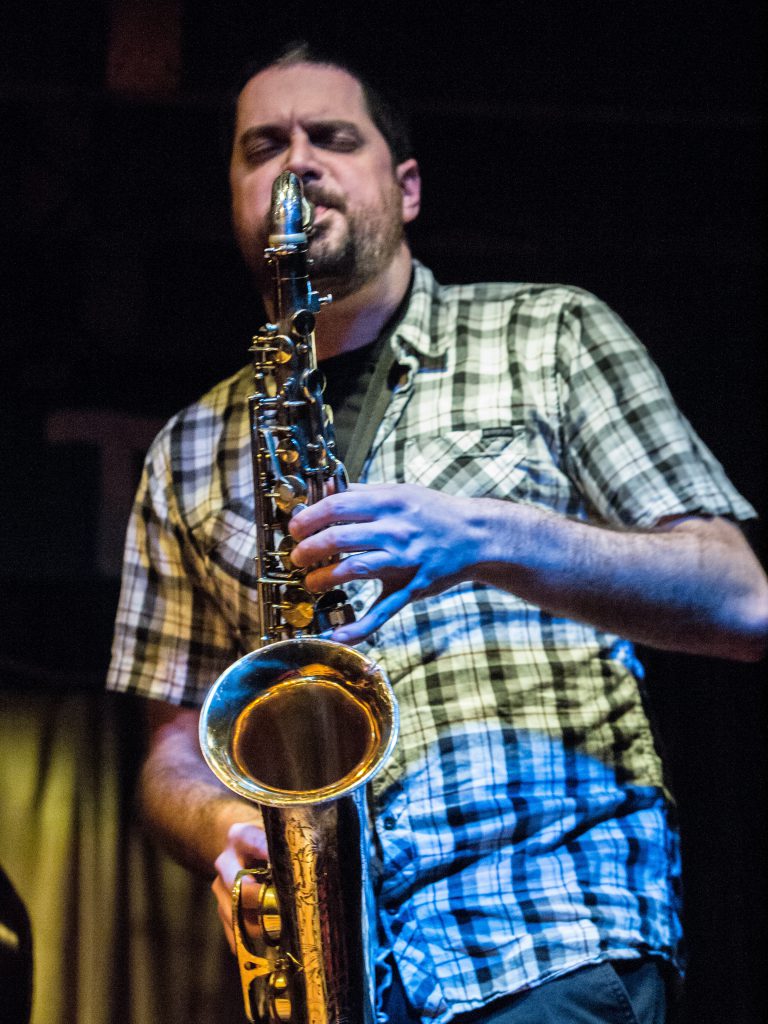 One of the top talents among avant garde saxophonists, Dave Rempis makes a rare visit to the Twin Cities on Thursday February 16 (8:30 pm), as he opens his 2017 solo tour at Jazz Central Studios in Minneapolis. Rempis was last in town some years ago while touring with the Vandermark 5. In addition to playing a solo set, Rempis will lead a trio set with vibraphonist Levi Schwartzberg and drummer Davu Seru. This performance, on Jazz Central’s “new music” series (usually Wednesdays), is curated by Jon Morgan. 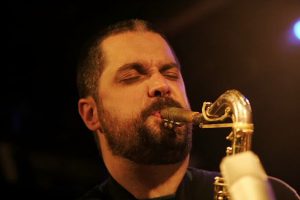 A native of Wellesley, MA, Dave Rempis began his musical studies at age 8, inspired by a family friend who played clarinet in local Greek bands, and further was encouraged to try the saxophone  by Zoot of the Muppets Band. During high school he performed in his town, district, and all-state bands and wind ensembles, as well as in a jazz combo at a local music school. Dave started college studies in classical saxophone at Northwestern University, but quickly dropped the music degree to pursue studies in anthropology and ethnomusicology. He spent a year at the International Centre for African Music and Dance at the University of Ghana, Legon, studying African music and ethnomusicology. He also performed with many different types of groups, ranging from highlife and reggae bands in Ghana to jazz, free jazz, funk, and contemporary music ensembles at home.

After graduating from Northwestern in 1997, Rempis decided to focus on performing, and in March of 1998 was asked to replace veteran saxophonist Mars Williams in the well-known Chicago jazz ensemble, The Vandermark Five. Soon he was touring regularly throughout the US and Europe, playing clubs, concert halls, and festivals on both continents. During his tenure with The Vandermark Five, Dave also launched some of his best known bands, including The Rempis Percussion Quartet, The Engines, Ballister, Rempis/Abrams/Ra, Wheelhouse, The Rempis/Rosaly Duo, and  The Rempis/Daisy Duo. Many of these groups have been documented on the Okkadisk, 482 Music, Not Two, Clean Feed, Solitaire, and Utech record labels.  Past collaborations have included Paul Lytton, Axel Dörner, Peter Brötzmann, Hamid Drake, Steve Swell, John Tchicai, Roscoe Mitchell, Fred Anderson, Kevin Drumm, Paal Nilssen-Love, Nels Cline, Tony Buck, and Joe McPhee.  Since 2006, Dave Rempis has been named regularly in the annual Downbeat Critics’s Poll as a “rising star” on alto saxophone and as a “rising star” and “established talent” on baritone saxophone. 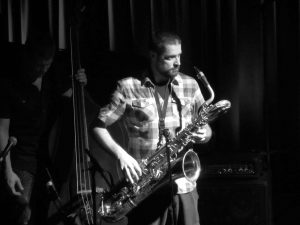 Rempis appears as leader or co-leader on over two dozen recordings. With his band Ballister (Fred Lonberg-Holm and Paal Nilssen-Love), he has most recently released SLAG, a live date at Cafe Oto in London, described as ” screaming, spewing fire and ash”, with a “rhythmic drive [that] drags the listener along face first, at times with flat-out abandon, and at times in lurches and spurts…” and “generally remains full speed ahead with no time to look back.”

An active presenter, Dave has curated a weekly Thursday-night concert series for the Elastic Arts Foundation since 2002, featuring over 500 concerts by some of the best improvisers from around the world while maintaining a focus on up-and-coming local musicians. In late 2005, Rempis helped form the presenters’ collective Umbrella Music, working with a small group of musicians and presenters in Chicago to provide better playing opportunities for creative and improvising musicians. As part of this group, he organized the annual Umbrella Music Festival from 2006-2014. Rempis is also one of the main organizers of the indie-rock Pitchfork Music Festival, a 60,000-person event which takes place in Chicago’s Union Park every July. 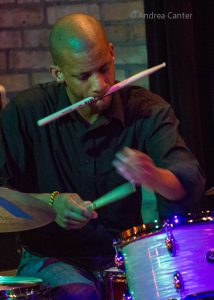 Davu Seru first played with Dave Rempis in Chicago while Rempis was curating a new music series. Respected internationally as a free jazz drummer as well as his performances in  jazz, rock and avant-garde improvised music, Davu’s percussion style is notable for his attention to sound, silence and melodic line as much as rhythmic pattern. The Minneapolis native has worked in recent years with Milo Fine, Andrew Lafkas, Jaron Childs, Charles Gillett, Elliot Fine, Anthony Cox, Dean Granros, Douglas R. Ewart, Dean Magraw, Stefan Kac, James Buckley, Nicole Mitchell, and the band Take Acre.  He currently works in a trio with French clarinetist Catherine Delaunay and French bassist Guillaume Seguron; the bands Click Song (with Marc Anderson and pick-up band), KCOB Trio (with Casey O’Brien and Nathan Hanson), Cherry Spoon Collective, and Merciless Ghost (with George Cartwright and Josh Granowski); is co-leader with Mankwe Ndosi of The Mother of Masks, an improvising ensemble of poets, storytellers, activists and musicians; and co-leads First Tuesdays at the Black Dog with Dean Magraw. He also leads the No Territory Band and recently joined J. Otis Powell and Kate Pehrson in a new project, the Nu Skein Ensemble. In addition to his musical pursuits, Davu is a PhD candidate in African American Literature at the University of Minnesota. In 2013 he received an American Composers Forum Minnesota Emerging Composer Award. 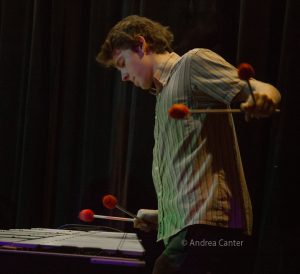 Levi Schwartzberg is only a junior at the University of Minnesotas, but he’s been perfecting his four-mallet technique on vibes since early high school days. He is also an accomplished pianist, currently performing on both instruments in the U of M Jazz Combo. A graduate of Minneapolis Southwest High School who participated for two years with the Dakota Combo, Levi has led his own ensembles at Jazz Central, Black Dog and Khyber Pass Cafe as well as performing with Adam Linz’s Le Percheron, the Charlie Lincoln Group, Sound Skirmish, No Territory Band, and more.

Jazz Central Studios is a nonprofit venue and education space at 407 Central Ave SE in Minneapolis, hosting live music at least five nights per week. Donations ($10, $5 students) are requested to support the venue and musicians. Full schedule at http://jazzcentralstudios.org.