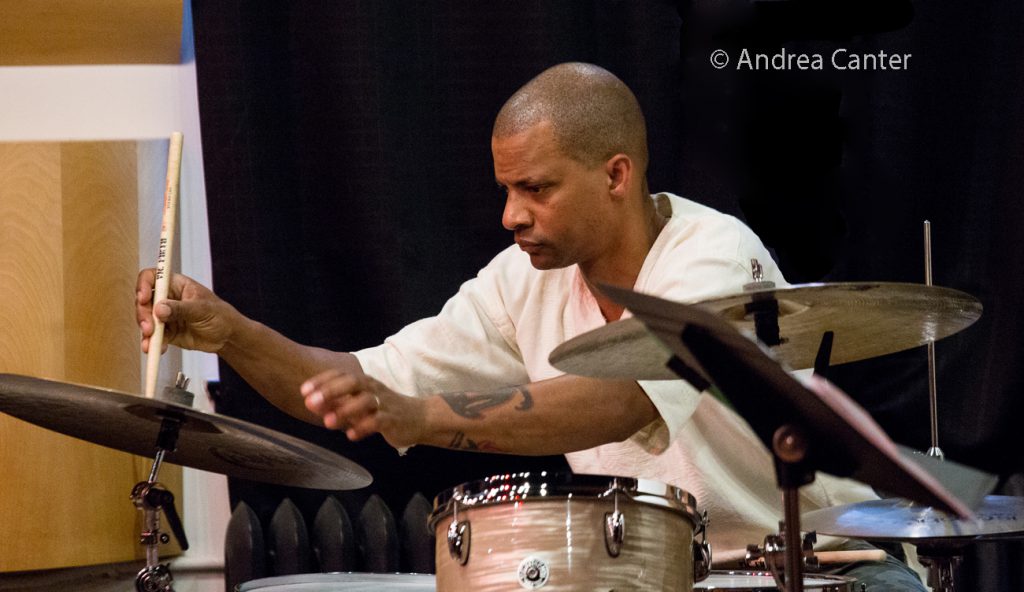 I had the good fortune of hearing Davu Seru’s Motherless Dollar Quartet at Jazz Central Studios this past Wednesday, October 9th. I caught the second performance of the band’s October residency at JCS (appearing every Wednesday except the 23rd). The quartet featured leader and composer Davu Seru on the drums and cello, Josh Granowski on the five-string double bass, Marc Anderson on percussion, and Scott Fultz on tenor saxophone. The first set was a little over an hour; the second set was half an hour. They played eight original compositions by Seru. It was an enjoyable night of music from a band that sounds unlike any other in the Twin Cities.
The first tune was called “Abbysinian Meetinghouse.” Granowski began pulling his bass strings with intensity, freed from any obligation to the chords of a piano or a guitar. He established a deep harmonic foundation from which the band could emerge. This would be the first time, but not the last time, that Granowski showed his command over the instrument and his gifts as an improviser. My guess is that Granowski pushes himself to play his best as Seru’s right-hand man in Motherless Dollar. It’s no small task keeping up with Seru. He’s a drummer with a vast imagination, the courage to explore it, and the technique to manifest it.

“Abbysinian Meetinghouse” progressed into a dark and glamorous pulse. All bandmembers obeyed this pulse, but not fully. Subtle rebellions caused the groove to continually refresh itself in new ways. Seru sat approvingly, and established his voice amid the ebullient conference. I was captivated. Seru’s drumming has a disciplined agility, the power to pause at any moment and redouble, renew, or reject an idea. His gestures are fast, fleeting, and explosively creative, yet they always seem to fall within a controlled dynamic range. These are rare qualities in a drummer, and they indicate a musicality beyond what is ordinary. 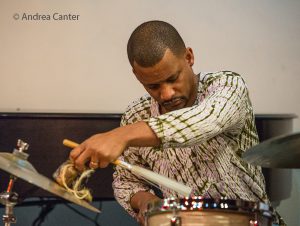 At that moment, the music turned on a dime. Seru migrated to his cello – the first and last time that he would play it – as the band downshifted from danceable energy to open and ominous ambience.  It was a fearsome change in mood, tone and texture, achieved not through more energy, but less. Exiting the pulse, the music entered a zone resembling something from Morton Feldman’s String Quartet No. 2. I was startled by the success of the composition. It had me wondering, “What is this band capable of?”

I quickly learned that Motherless Dollar is capable of developing, among other things, a very deep and unique rhythmic pocket. On the tune “Double Dutch,” Marc Anderson’s percussion work supported this pocket and enhanced the group sound. Anderson played mostly on the congas, but had a rack of Pete Englehart bells and some meditation cymbals at his disposal. He and Seru are good rhythm partners. Anderson’s stable and inventive time-keeping enabled the band to attain highly propulsive energy at the peak of their collective improvisations. Rarely do I hear music so forward-driving, yet so laid back and comfortable. Anderson is a key ingredient to this particular magic. 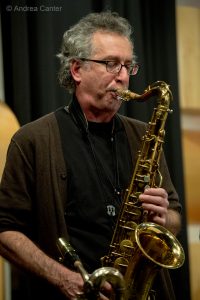 Seru wove an allusion to Charlie Parker’s “Now’s the Time” into a composition called “Suffer the Children.” The allusion followed a passage of bold improvising, revealing Seru’s interest in blending the lines between composition and improvisation (this general interest has driven so much of jazz history). Scott Fultz stepped out on the tune and delivered a beautiful solo. Fultz has a warm and subtle tone on the tenor saxophone. His ideas are clear and original. A naive listener might object to Fultz’s measured energy contributions to Motherless Dollar. This would be a mistake. It is not only consistent with the band ethos, but is its own pivotal element. Only because Fultz plays the tenor saxophone in an avant-garde capacity do we expect the energy levels of Albert Ayler or John Coltrane. Again, this would be a mistake. The naive listener is simply not accustomed to instances in which the majority of tones from the tenor saxophone sound clear and mellow in a free context. Fultz’s approach makes me think of Clifford Jordan and Chris Speed, tenor saxophonists who chose many mellow tones.

The night was filled with many memorable moments. One that stands out was when Granowski executed shimmering double-stop arcos (bowing two strings at a time) in full harmonic richness. For a moment, he became his own string quartet, if a string quartet could rock pocket chains, toothpicks, and black earrings. I suspect Granowski is a deep improviser and a true American badass. He should be respected as such.

Before the second set began, the leader spoke to the meaning of the name. “Motherless Dollar comes from the blues tradition,” he said, adding that it means “you’ve got one dollar left.” The explanation raised questions I’ve long had regarding Seru. Which traditions does he consider himself a part of? Given his astounding originality, what are the component parts of his musicianship? What are the big-picture philosophies that guide his work? Also, what effect does he have on audiences who are often very far removed from his cultural and artistic heritage? These are not questions I’ve asked or intend to ask Seru. These are questions made possible through his music, and they indicate something profound and alive. The discipline of science wants to answer questions; the discipline of art wants to expand the possibilities within the questions. Seru is an artist in this sense, while we, the listeners, can play scientist if we so choose. The bottom line is that I’m lucky my dollars aren’t motherless, and that I’ll have 10 more to spend next Wednesday at Jazz Central to once again hear this outstanding band.

Sam Worthington is an acoustic bassist in the Twin Cities often heard at the Black Dog, Jazz Central and other hot jazz venues, finishing up studies at the University of Minnesota. And a frequent Facebook commentator on life and jazz. We’re hoping Sam will be an ongoing contributor to Jazz Police!