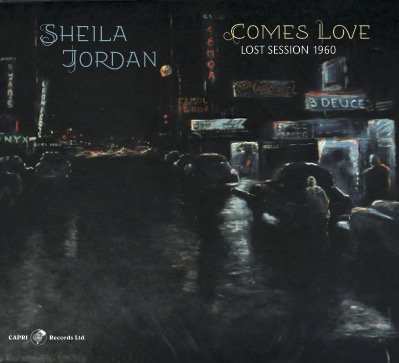 As last year brought to us found recordings from the mid-century, including Art Blakey and the Jazz Messengers’ Just Coolin’, Sonny Rollins in Holland, and Charles Mingus @ Bremen (All three of which are included in my best of 2020 review), this year’s discoveries include a live recording of John Coltrane’s A Love Supreme Live in Seattle and this hitherto unknown gem from the revered bebop singer and NEA jazz master Sheila Jordan. Comes Love: Lost Session 1960 to be released on September 17th by Capri Records was recorded on June 10, 1960, at New York’s Olmsted Sound Studios –  2 years before her debut album on Blue Note records Portrait of Sheila. 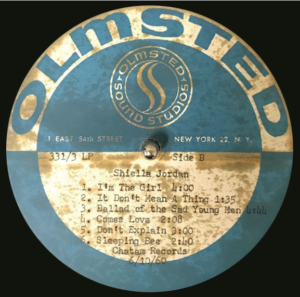 We owe this discovery to Jeremy Sloan and Hadley Kenslow of Albuquerque’s SloLow Records who purchased a box of acetates and found this recording among them and recognized its significance. The acetate did not list any of the musicians playing with Sheila, only the track listings and a head-shot of Sheila was included. We don’t know who was playing with her on this recording but we can make an educated guess based on who she was playing with at the time in 1960.

In her teens Sheila moved from rural Pennsylvania to Detroit, where she became devoted to jazz after hearing a Charlie Parker recording. She was friends with some of Detroit’s young musicians during that time, such as Tommy Flanagan, Kenny Burrell, and Barry Harris.  In the ’50s she moved from Detroit to New York to pursue her singing career and in 1958 she started a regular Monday night gig at the Page Three, a lesbian bar and cabaret on Seventh Avenue in Greenwich Village, just south of the Village Vanguard, singing with pianist Herbie Nichols and drummer Ziggy Willman. It was at this time that she formed a musical relationship with bassist Steve Swallow who also appeared on her Blue Note debut. Nichols was replaced with Johnny Knapp and then Knapp was later replaced with Dave Frishberg. Cecil Taylor also substituted for Herbie Nichols occasionally.

Steve Swallow, quoted in the Sheila Jordan biography Jazz Child: A Portrait of Sheila Jordan recalls that this was a pivotal moment in his career. “The pianist John Knapp called me to work Monday night at the Page Three. I had arrived in New York only a few months before, and was still feeling my way into the city. That club became a kind of home to me. It was a gay bar, at a time when gays needed to be furtive and circumspect out in the real world. But at the Page Three they could be themselves, and offer each other loyal friendship and support, which they also extended to me. I was deeply grateful, and looked forward to those Mondays. Sheila was revered in that room by the regulars who constituted most of the audience week after week. There were usually a handful of other performers (I especially remember The Unique Monique), many of them not so good and treated with fond derision, and then there was Sheila. The room fell still when she sang; everything stopped. I remember one night, just another Monday, and Sheila was singing, ‘I’m a Fool to Want You.’ I was playing along, focusing on playing the right note at the right time, when suddenly tears erupted from my eyes. That had never happened to me before, and I was mightily embarrassed, I did my best to cover my confusion and to keep the bass part on track. I never again took Sheila’s singing lightly”.

Dave Frishberg recalled these times on the Rifftides blog by Doug Ramsey: “Around the time I first came to New York, during the late fifties, I got a call from a piano player named Johnny Knapp. He asked if I would be interested in replacing him with the band at the Page Three. … ‘You have to play a continuous show,’ he told me, ‘the hours are 9pm to 4am, and the pay is seventy-five a week.’ I told him I would be interested. … What I looked forward to each night was Sheila Jordan. Sheila was magic. The customers would stop gabbing and all the entertainers would turn their attention to Sheila and the whole place would be under her spell.”

Sheila Jordan does not remember the session so she could not say who played on it. But since at the time Jordan was working regularly at the Page Three with pianists John Knapp, Dave Frishberg or Herbie Nichols; bassists Steve Swallow or Gene Perlman; and drummer Ziggy Willman, it’s probable that some of these musicians can be heard on Comes Love, though there’s no way of knowing for certain. In 1960 Jordan had joined bass player Peter Ind and recorded the song “Yesterdays” on the album Looking Out on the Wave label along with Ronnie Ball on piano. So it is possible that they were recruited for the session. However Sheila’s 1977 release Sheila by Sheila Jordan and the Johnny Knapp trio features Knapp with Steve Swallow, and Ziggy Willman covers some of the same tunes and I tend to think that these musicians also appear on Comes Love: Lost Session 1960.

Comes Love: Lost Session 1960 is from the earliest known recording session for Sheila Jordan and captures her in the early stage of her career. Her voice is young but instantly recognizable. She sounds self-assured as she improvises, bends notes, and scats through a selection of standards and some obscure tunes.

Both her voice and technique grew substantially in subsequent decades. In live performance Sheila’s stage presence is powerful yet disarming. Her rapport with the audience is heartfelt and honest. Listening to Comes Love it is easy to imagine sitting at a table at the Page Three club in 1960 Greenwich Village enjoying a cocktail while listening to Sheila Jordan as she was honing these skills while holding the crowd in the palm of her hand.