Any local jazz aficionado who hasn’t had the pleasure of hearing pianist Will Kjeer is hereby forewarned: get out to see this up-and-coming  performer while he’s still planted in the Twin Towns. Because all the local musicians agree–Kjeer is a performer on his way up. And one never knows how long a musical gem of this caliber can remain in this Twin Cities bailiwick.

Kjeer (pronounced “Keyer”) is a St. Paul native who graduated from Cal-Arts in 2019, and had been performing and teaching in Los Angeles, establishing his name and building his resume, but that was prior to the onslaught of the Coronavirus.  Kjeer has returned to his St. Paul home in the West 7th neighborhood, honing his chops, playing  festivals (his appearance with tenor giant Jerry Bergonzi at Crooners was a recent highlight), conducting jam sessions, and streaming online. Kjeer will perform selections from his upcoming CD, “Undreampt,” on the series Saturday Night Jazz at the Black Dog on Saturday, August 7th, in a trio with bassist Charlie Lincoln and super-drummer, Dave King.  This all happens Saturday at the Black Dog Cafe in Lowertown, Saint Paul as part of a weekly series curated by Steve Kenny. See the following MinnPost Artic 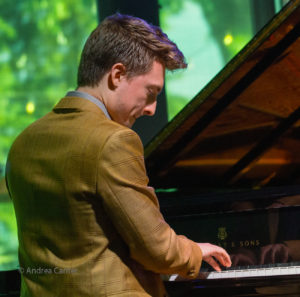 le on the series reopening : Here

“I didn’t want to endure the lockdown in Los Angeles,” said Kjeer, 24, explaining his return to Minnesota. “Without being able to work, and having to afford the rents in California, it was an easy decision to return to Minnesota and ride this thing out. And frankly, I’ve been so busy back here–both playing and recording–that whether I’ll move back to LA is an open-ended question.”

For now, Kjeer is planted at his mother’s home in the West 7th neighborhood. He stays busy practicing the piano, composing, and hosting jam sessions. Now, with  venues reopening, Kjeer is getting more bookings and planning for the release of “Undreampt” (No release date has yet been set).

“I wrote all the tunes on the recording but I also see it as a collaboration with Charlie and Dave. They added so much flavor to the tunes. Dave is an established ‘name’ drummer who’s  played and recorded with many of the best musicians in creative music. Both Charlie and I consider working with Dave as a masters program, an apprenticeship that demands the best of us.”

King’s eclectic drumming encompasses nearly all the rhythmic styles–in jazz, Latin, funk, rock and punk. He initially made his name with bands Happy Apple and The Bad Plus, and has constantly toured extensively for years. Like Will, the pandemic anchored King to the Twin Cities during the pandemic. And the lockdown enabled the trio to get in the studio.

“I met Will at a summer workshop at McPhail School of Music, in St Paul,” said King. “Will stood out to me even then,” said King. “He had talent, but even better, I could tell he was serious about his playing. Better still, he had a humble attitude which I found refreshing for a younger player. On my visits home, I’d often see Will perform at the Artists Quarter or at the Twin Cities Jazz Festival. He’d come to our Bad Plus appearances when we played LA during his colleg 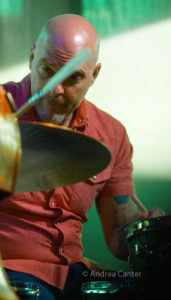 e years, and we stayed in touch. Will is definitely progressing.”

The formation of a good jazz musician is almost a recipe. It begins with an early exposure to music. Kjeer grew up listening to jazz in Kenny Horst’s sorely missed Artists’ Quarter, which afforded the youngster exposure to top tier musicians of local and national stature. Former owner of the AQ, Kenny Horst, is Will’s uncle. He said Will’s determination began early.

“Will’s mother called me one day and said, ‘Will wants to be a jazz musician.’” said Horst. “She didn’t say that Will wanted to try playing jazz. No. She said Will wanted to BE a jazz musician. That was his attitude from the beginning. She told me Will had come to the decision from listening to Vince Guaraldi on the soundtrack of the Peanuts cartoons.”

In his high school years, Kjeer manned the keys for the Dakota Combo, which gives young talents experience in performing at venues like The Dakota Jazz Club. And he began sitting in at the Artists Quarter, and gigging for the Twin Cities Jazz Festival. By the time he shipped off to Cal-Arts, Will was of professional caliber.

Bassist Charlie Lincoln, 23, is a contemporary of Will’s, a phenomenal young contra-bassist who has worked consistently with the pianist. He offered input into Will’s style of playing and composing. “Will is always challenging himself, pushing his own limits. Sometimes, you can tell he’s overthinking a passage, but when he’s past all that, he is a formidable artist. And the music for the trio record is not easy to play. Not a lot of standard forms are used. The charts can be intimidating, but Dave suggested we learn the tunes by ear, without reading the parts. That was a challenge. But it really opened us up.”

Music is slippery to describe with accuracy. But to take a few swings in that direction, one could say that “Undreampt” is a gumbo of modern jazz styles. One is tempted to use sobriquets like “Post-post-bop” and other such offerings. Some passages are redolent of Keith Jarret’s groups from the 1970s, Chick Corea of “Now He Sings, Now He Sobs,” or perhaps some of the Israeli notables like Brad Meldau, Anat Fort, or both Avaishi Cohens. Classical influences, especially in the composing, seem evident. One certain consistency in Kjeer’s “Undreamt ” is that the music is constantly shifting.

The recording begins with “Arrival,” which launches off in a loopy, Monkish vamp, the guess 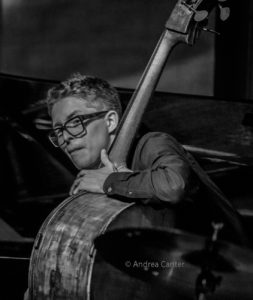 is it’s in 5/4, but Kjeer was no help. “The phrase is the thing,” he said. “Like Miles Davis says, ‘I’ll play it and tell you what it is later.’” The theme crashes through a series of abstractions, roughly in an ABC form, with King juggling the rhythm breaks with the precision of a circus knife thrower, who knows the necessity of perfection.

“Bound” begins with a dense, turgid intro that spills into a simple theme, then weaves through peaks and valleys, yet maintains the line behind King’s drums and Will holding the harmonic center. Lincoln plays a marvelous solo–the boy got tone–while Will assists with accompaniment. There seems to be some sort of musical radar that keeps the trio on the beam. King cuts loose on the out chorus and a listener might wonder why “Bound”  needs to end after just five minutes. They were just getting started.

“Breath in Flight” is the wildest ride of the bunch. A furious attack by Kjeer in a time-signature hard to parse which proceeds to launch this musical rocket higher than Bezos will ever go. Simplicity and Sophistication marry on this one. Lincoln holds the center in the floaty middle section and then—here it comes—a hold-onto-your-hat tornado of free improve that leads back to the theme.

“Current” starts off like one of the 70s samba recordings of Chick Corea, with a more Spanish (Andalusian) feel than Brazilian. But, as in all of Kjeer’s other compositions, “Current goes  spelunking without sounding forced or labored. Its transitions flow like the changing view from a train in the Alps, changes that make the ride all the more intriguing.  A simple waltz suddenly emerges as if from a Disney flick, followed by a section both lyrical and spacey that segues into a beautiful melodic passage that elevates the listener into a place of what one might–at the risk of sounding treacly–call a “spiritual reverie.” 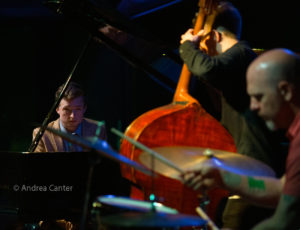 “Dragon” reminds one of the feel in McCoy Tyner’s album “Trident,” with its open pedal, and King’s mambo musings on cymbals and toms. Drummer Elvin Jones drove the rhythm on “Trident,” and Elvin’s smashy accompaniment is mirrored by King on “Dragon.” Then comes the arrival of an implied funk groove. Lincoln is wonderful in this section, dancing between the drums and piano with surety. A thunderstorm of free improve follows with King and Kjeer going at each other like Frazier and Ali.  “Dragons” leaves the listener feeling like his feet are about to leave the ground.

“I’ll Be Leaving Soon,” is a nice break from the tumult. “It kind of reflects the moves I’ve made in recent years–to and from Los Angeles,” said Kjeer. “And of course exploring new places both artistically and geographically. There is often happiness and sadness mixed together at those times, and that’s what I was thinking about here.”

“Rabbit” has a back-and-forth triple meter that breaks into an open section. King plays a furious 6/8 that’s evocative of Jimmy Hendrix’s “Manic Depression,” as if Mitch Mitchell had studied drums with Weather Report’s Eric Gravatt. The ending has a series of abrupt stops amid the fusillade, all landing with pinpoint accuracy. Kjeer’s inspiring play again leaves the listener wishing for more.

“Wildfire” is the warm-down of “Undreamt,” a gorgeous ballad one can listen to in the dark and not feel alone. “Wildfire” settles the nerves. This is Will talking. Then Lincoln wanders in and plays the second section in near tandem with the piano, then solos to Kjeer’s accompaniment. King assists on brushes, content to support and embellish. Play this one a second time. Better than a glass of Scotch.